I think in the past I was disappointed with store purchased orchids because they seemed to look so nice coming home from the store, and then two or three weeks later they were veritable sticks. So after a while of no blooms, out they go.

I think what confused me, and probably why most people are initially disappointed by orchids, is they looks so nice — and then nothing. It never occurred to me they bloom only once a year. Because at the store they are always blooming.

Of course they are. So you will buy them. But individually, they bloom once a year. The fix for that is to buy a blooming one every month, or every two months, so you can always have one to rotate out (every month or so) that will be blooming.

I bought both of these last March, and they are beginning to bloom again. This moth orchid (the one they say is the easiest to grow) sprouted that bottom branch and it looks like there will be ten blooms pretty soon. I didn’t know if I was supposed to tie up the branch so it would grow upright, and I didn’t want to stress it, so I just let it go. 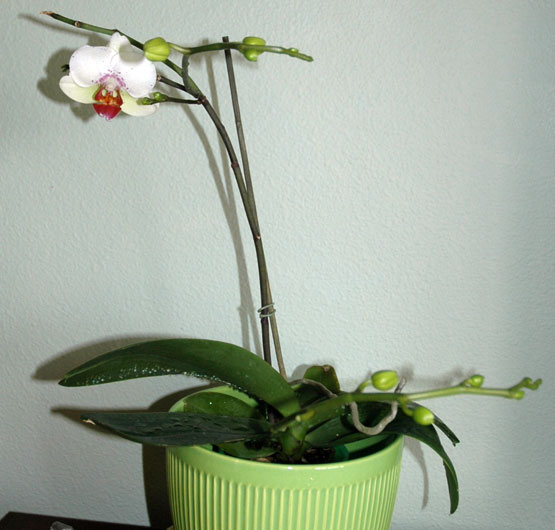 In a couple weeks, more flowers! I’m excited, after waiting all year. I used the orchid fertilizer about once a month, which wasn’t as much as recommended. Every two weeks I think the package said. But I faithfully let them sit in a dish of water for an hour every weekend, sometimes moved them in to enjoy steam from the shower, and sometimes washed off their leaves with the sink hose to simulate rain and wash off the dust.

I don’t know what kind of orchid this is, and I bet it’s height has doubled over the year. Three of its stems are about to produce flowers.

2 thoughts on “the orchids a year later”